Recently, I have been thinking about teaching my son Henry Â how to play Dungeons & Dragons as I think he would like the game. His reading and math skills have improved significantly over the past few months and we have always enjoyed creating mass battles using his D&D minis. With the minis we would keep the rules pretty simple, if we used any rules at all, so I knew I would need to simplify the RPG rules. Character sheets, combat rules, and encounters would all need to be scaled back to match his comprehension and maintain the fun. My thoughts were to use the D&D 4th Edition RPG Starter, stripping down the rules to match his abilities. I figured that would take a few hours of work and I was not quite sure where to start.

On Sunday, we were playing together with some of the new toys he had received at his birthday party. We played a few games of Connect 4×4, Lego Bionicles, and then he wanted to play with his Star Wars toys. Earlier in the week he had pulled my copy of the Star Wars RPG Invasion of Theed Adventure Game out from the closet and was using the map with his minis. 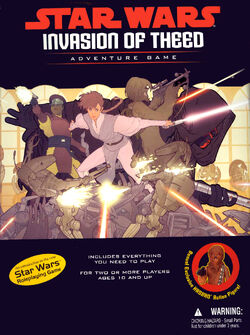 On a whim, I decided to grab the game and see if he wanted to play. The game uses the d20 system so I figured it was a good introduction to D&D like roleplaying plus the adventure game has already stripped down the rules to basic elements. While he was looking at the stuff in the game box, I started sellecting minis to use in the first encounter. I set up the map and let him pick a character. He chose Rann I-Kanu the Human Jedi Guardian (padawan). I decided to play Rorworr the Wookiee Scout. I gave him a quick explanation of the turn rules of Â standard, move, minor actions. I explained his dice and talked about how I would play his friend Rorworr as well as roll dice for the bad guys as the game master. We started the first encounter. I read Â aloud the scenario text, explaining the Trade Federation invasion of Naboo and that in the immediate situation some battle droids were trying to arrest our heros. I asked Henry what he wanted his character to do, prompting him with a few choices including: running away, fighting, or trying to get into the awaiting speeder and escape. He chose to fight, the initiative order was established, and combat began. I modified the battle droids to use basic hit points, killing them at 0HP, instead of using the Star Wars RPG rules of vitality and wound points. Henry rolled well, his character destroyed a few droids and made it over to the speeder. My wookiee scout did not fare so well, losing all his HP, requiring medical attention at the end of the encounter. The two heroes managed to escape in the speeder and went on to join the Naboo underground. The second encounter required the heroes to rescue Naboo citizens who had been taken prisioner by the Trade Federation. Galak, a Human Soldier joined the party and I played this character as well as Rorworr. I wanted Henry to get a better idea of the non-combat options a roleplaying game has to offer so I decided to start this encounter with the wookiee trying to intimidate the two Neimoidian guards into running away. The wookiee and human soldier both failed their intimidate checks but I let his Jedi use the Empathy skill check as a Jedi Mind Trick to try and convince the guards to take a Â walk. He rolled a 19 beating the guard’s Will save and was very excited by his use of the force. With the guards gone, we moved over to the makeshift jail. Henry wanted to check the side door but after failing to break it down we moved over to the main door. My wookiee was able to open the door but this triggered the some guard droids and the encounter Â shifted from non-combat to a combat. The party was able to take care of the 4 battle droids with little problem. Â I was rolling poorly for both the PCs and NPCs but Henry was rolling lights out, finishing off with two natural 2os in a row! It was a proud geek dad moment to see my son role crits, taking the heads off both battle droids. He was also able to use a Disable Device skill check, rolling a 19, to get in the side door and find a weapons cache! All in all it was a great experience. I could not have asked for a better first session, we had fun and he wants to play again. This is a great game to own as it comes with everything you’ll need to play right out of the box. If you are looking to introduce a youngster to table top RPGs try to find a copy of this game. It was printed in 2000 but you can still find new and used copies online, a quick search turned up new copies for as low as $9.99.